Summertime in Vancouver means one thing and one thing only (at least for us): new food in the city. While 2018 thus far has seen many gastropubs, microbreweries, cafes and sweet shops opening their doors across all Vancity neighbourhoods, we’ve been fairly preoccupied with the new haunts popping up in ours. Downtown. West End. Coal Harbour. Yaletown. No matter its iterations, the southeastern part of Vancouver’s northern peninsula is notorious for being a nom haven for foodies, tourists and those on the daily grind in the bustling business district.

Although I can count roughly a dozen new downtown food ventures off the top of my head, I have yet to try them all (yet). So far this summer, with the help of a few more hungry giants at my side, I’ve tested out five new downtown Vancouver food spots to share with you.

Well, well, well. An ice cream shop after my own heart (and name)! What used to be home to the pink icing and rainbow-sprinkles decor of Cupcakes, has now morphed into an inky retro room outfitted with black on black on black. And the website – much like its obscure exterior – doesn’t give anything away. 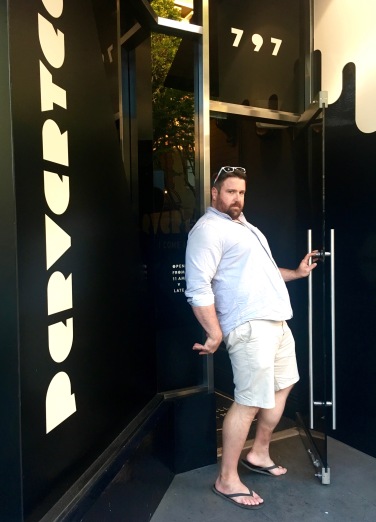 If you weren’t intrigued by the mystery surrounding this place – which recently opened on Robson Street at the beginning of the summer – you’re guaranteed to be intrigued by the menu. Boasting ice cream concoctions with risque names like Beg for S’More, Brand Spanking and Matcha Macho Man, Perverted Ice Cream gets an A+ from me for creativity and wordplay.

As always, I opted for the most bacon-y selection on their mouth-watering board, Puppy Dog Tails, while Ryan went with the flirty Coquette cone. Needless to say, both our cones were nothing like we expected but everything we could imagine.

Perhaps my biggest kudos was the cleverly-placed lodge of chocolate (or wafer crumbs?) at the bottom of our cones, which prevented any unnecessary spillage of ice cream.

After over a year of vacancy, the building that previously (albeit briefly) housed our nextdoor haunt, Jethro’s, has finally been taken over. And although the new cafe is nothing like its greasy-spooned and giant Southern comfort predecessor, Ryan and I were at least happy to see something other than “For Lease” signs in the windows (the bane of Vancouver establishments). 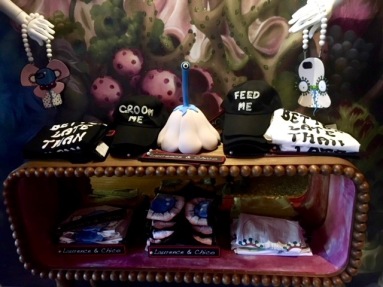 Laurence & Chico – a Canadian womenswear and accessory line from designers Laurence and Chico (surprise) – offers patrons a selection of dainty and beautiful pastries, hot beverages and – of course – an elaborately decorated space reminiscent of Alice in Wonderland along with some merch. Vibrant, fur-cloaked thrones sport unicorn horns, tassels and jewels, while clear glass sits atop twisting green log tables. My friend Kathy cautiously took a seat on one of the fur-lined poofs available before realizing that they were in fact fur-line exercise balls. Why not get a workout in while dining?

After enjoying the tasty (but pricey) sweets and iced coffee we ordered, we couldn’t help but notice the crowds gathering around the two cafe bathrooms. With one peek inside, we found out why.

Even if you’re not a fan of delicate pastries, high tea or macaron ice creams (yum), it’s worth a wander inside Laurence & Chico’s to discover the strange, mesmerizing minds of the owners.

That was precisely my reaction one afternoon after exiting my favourite bubble tea joint (Happy Lemon) on Robson Street. Shyly hidden between Bute and Thurlow, Castella Cheesecake recently – and quietly- soft-launched their product and their store. Selling the Insta-famous Japanese-style cheesecake souffles eagerly sought out by foodies worldwide, Castella’s menu is succinct, affordable and enticing.

A further bonus for both Kathy and I – both regular coffee consumers and cold brew connoisseurs – was the discovery of a nitro cold brew tap behind the counter. My eyes widened as I watched the friendly girl at the till fill my cup with thick, sultry nitro cold brew (a huge cup for only $3.65) – and I was more than pleasantly surprised. 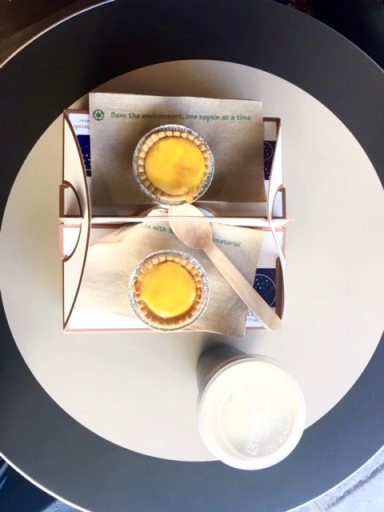 The cake itself was tasty – not too sweet, surprisingly dense, spongy and cheesy, but the stars of our stop were by far the cheese tarts (warm, gooey and tangy) and the foamy, stout-like cold brew. Next time, I’d opt for the $15/box of 6 cheese tarts to tide me over.

On the lookout for a new brunch place in the neighbourhood, Kathy discovered White Lounge, the newest trendy restaurant to grace the narrow streets of Yaletown. We arrived minutes after opening on a Sunday morning – ripe and ready for their brunch offerings, and wondering if our meals were as pricey and fancy as the establishment looked. 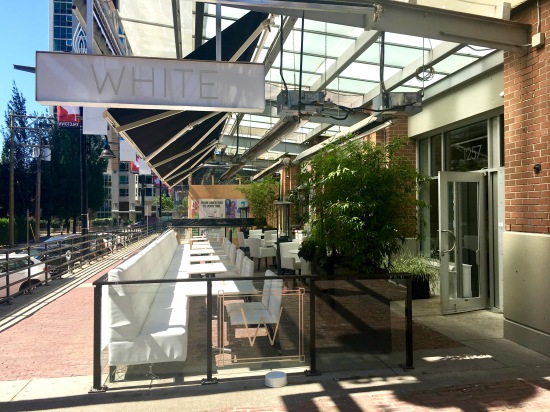 Clean lines, bold shapes and ivory stylings – the place was just as it was advertised. And a plus – the respectably-sized patio was open, available and waiting for us.

And then we discovered the $4 mimosas. 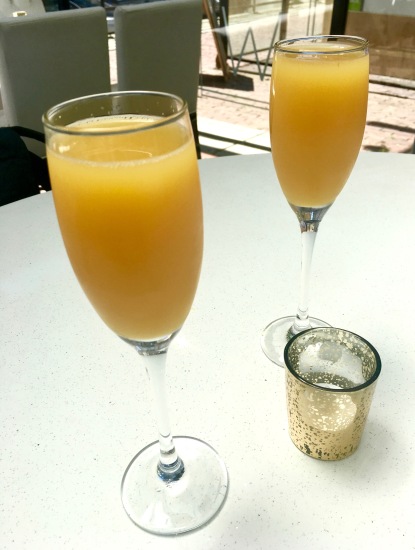 The menu itself was fairly bare bones, and while one or two items stood out to us (the gingerbread waffles I ordered, for one), the rest wasn’t jaw-dropping. Taking a peek at the regular menu revealed a much more delectable selection – with unfortunately, an equally rich price point. 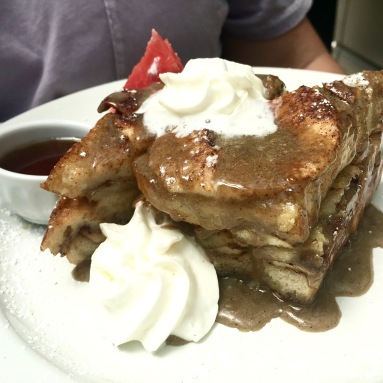 While we both enjoyed our meals well enough, would we go back for the food anytime soon? Probably not. But the mimosas? We’ll see you there next week.

Walking up and down Denman Street occurs once or twice a month during one of me and Ryan’s date nights. We never know which restaurants have closed their doors, or which ones have opened them. Fortunately for us, we happened to pass Gilaneh Grill House (its original location in North Vancouver) on one of these regular strolls. And after checking the menu and pacing for a block or two,, we doubled back and grabbed a seat on the patio – and about 10 minutes before the dinner rush showed up.

If the menu hadn’t sold us already, our meal would steal our hearts and tummies. If you’re a fan of Persian food, kebabs, or anything hearty and spicy – then you have to eat here.

After settling down with one of the Parallel 49 draughts available (always a welcome sight), we had to make some tough decisions. 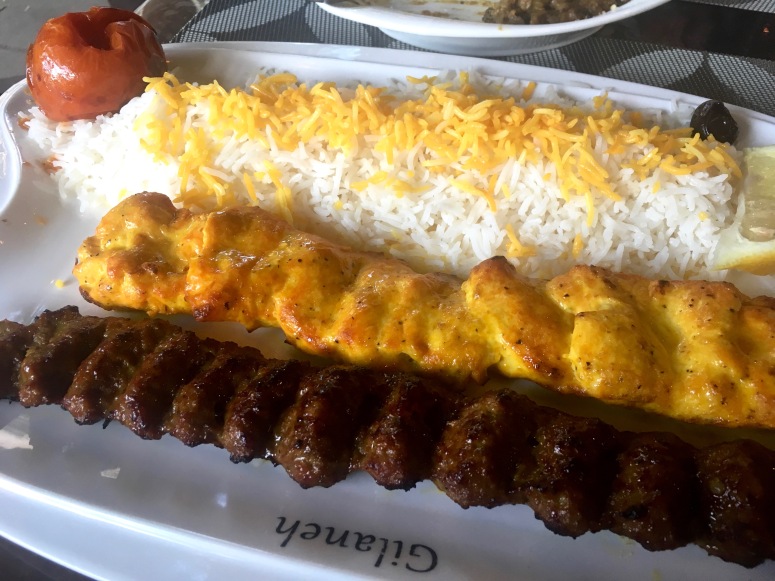 Starting with the mirza ghasemi (or smoked eggplant dip), we made our way through two rounds of pita and onion before receiving our main courses with open arms. I ordered the massive meal of minced beef kebab and chicken kebab – all on a bed of tender rice and paired with a juicy grilled tomato. Ryan opted for the zershk polo stew – a fragrant and complicated dish that we still haven’t figured out (what were those spices?).

While dining, we were so enthralled with our meals that when friends of ours came up to our table to say hi, we easily convinced them to dine there that night too. Our pro- tip? If you’re in the area and see a spot free on the patio, don’t hesitate. Otherwise, it’s probably smart to make a reservation.

Of course, the moment you eat at one new food stop, another three appear. But don’t worry – we’re always on the hunt to discover more new food in Vancouver. Stay tuned!

^ That’s us! We’re just two Vancouver foodies who love to travel, love to eat – and try desperately to do both as often as possible. Join me (Jess) and my giant man beast (Ryan) as we discover the best street meats and tasty treats around the world. If you also happen to have a giant appetite and thirst for adventure, read our giant recipe hacks and travel tips for some inspiration!

Learn more about us…

What are you looking for?